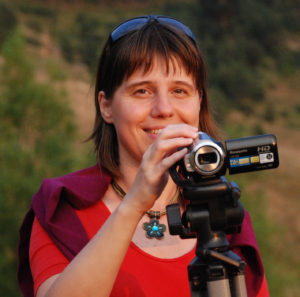 Nina Grantcharova is a Bulgarian folklorist, singer and cultural facilitator.

Over the last 9 years Nina has researched the folklore of the villages in the Northwest Rhodope mountains in Bulgaria. Her field work has produced an extensive library of vocal and instrumental music, dances and traditional crafts from the region. Since 2013, Nina has organized a number of workshops in Bulgarian folk dance and singing, mainly on location in the Rhodope mountains.

Nina is the main organizer of the international Friendship Minifestival in Ravnogor (2013-2018). She is also involved in the organization of the annual Bagpipe Competition in the village.

Mihail Dinchev, born in Vidin, North Bulgaria is a music and dance artist and pedagogue. He teaches Bulgarian folk dances through his unique pedagogical method and has done numerous dance-workshops and courses around Swedish schools and companies with people of all ages.

Together with the dancing Mihail sings and plays the Bulgarian traditional instrument Tambura in groups like Lele Lele (lele-lele.se) and 3 Leva (trioleva.com)

Mihail graduated Music Pedagogy and Dalcroze Eurytmics in 2009 from the Royal College of Music in Stockholm and specialized in Bulgarian folk music and dance in Plovdiv Academy of Music, Dance and Fine Arts in Bulgaria in 2005-2006.